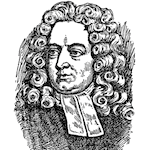 Jonathan Swift  was an Anglo-Irish priest, satirist, essayist, political pamphleteer, and poet, famous for works like Gulliver’s Travels, A Modest Proposal, A Journal to Stella, The Drapier’s Letters, The Battle of the Books, and A Tale of a Tub. Swift is probably the foremost prose satirist in the English language, although he is less well known for his poetry. Swift published all of his works under pseudonyms—such as Lemuel Gulliver, Isaac Bickerstaff, M.B. Drapier—or anonymously.

Gulliver's Travels (1906)
Gulliver’s Travels (1726, amended 1735), officially Travels into Several Remote Nations of the World, is a novel by Jonathan Swift that is both a satire on human nature and a parody of the “travellers’ tales” literary sub-genre. It is widely considered Swift’s magnum opus (masterpiece) and is his most celebrated work, as well as one of the indisputable classics of English literature. The book became tremendously popular as soon as it was published (Alexander Pope stated that “it is universally read, from the cabinet council to the nursery”), and it is likely that it has never been out of print since then. George Orwell declared it to be among the six most indispensable books in world literature. It is claimed the inspiration for Gulliver came from the sleeping giant profile of the Cavehill in Belfast.