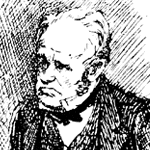 William Henry Giles Kingston was an English novelist known for his many books for boys. Kingston was born in London, but spent much of his youth in Oporto, Portugal, where his father was a merchant. His first book, The Circassian Chief, appeared in 1844. His first book for boys, Peter the Whaler, was published in 1851, and had such success that he retired from business and devoted himself entirely to the production of adventure stories for boys. During 30 years he wrote upwards of 130 tales, including The Three Midshipmen (1862), The Three Lieutenants (1874), The Three Commanders (1875), The Three Admirals (1877), Digby Heathcote, The Boys’ Own Book of Boats, On the Banks of the Amazon, In the Wilds of Florida, A True Hero, and Twice Lost. Many of his stories were serialized in one of the weekly or monthly publications. He also edited various newspapers, including The Colonist, Colonial Magazine and East India Review. He was also interested in emigration, volunteering, and philanthropy. For services in negotiating a commercial treaty with Portugal he received a Portuguese knighthood.

In the Wilds of Florida (1901)
In the Wilds of Florida is a tale of an Irish schoolboy who leaves school and his struggling family in Ireland to come to America. He experiences a Florida where fighting still erupts between Cherokee and Seminole Indians, where white people are under threat of Indian attack, and the landscape is mostly swamp or plains of dense brush.