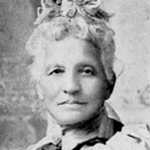 Elizabeth Hobbs Keckley was a former slave turned successful seamstress who is most notably known as being Mary Todd Lincoln's personal modiste and confidante, and the author of her autobiography, Behind the Scenes Or, Thirty Years a Slave and Four Years in the White House. Mrs. Keckley utilized her intelligence, keen business savvy, and sewing and design skills to arrange and ultimately buy her freedom (and that of her son George as well), and later enjoyed regular business with the wives of the government elite as her base clientele.

After several years in St. Louis, she moved to Washington, D.C. in the spring of 1860, where she had the country's most elite women of the time requesting her services. Through shrewd networking and hard work, she ended up making gowns and dresses for more notable wives such as Mrs. Varina Davis, wife of Jefferson Davis, and Mrs. Mary Anne Randolph Custis Lee, wife of Robert E. Lee. Of all her clients, she had the closest and most long-standing relationship with Mary Todd Lincoln, devoting many of her days during Abraham Lincoln's administration to being available to her and the First Family in a myriad of ways.