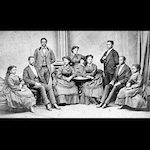 Jubilee Singers of Fisk University were a group of African American singers in the 1870s. Their repertoire centered on spirituals, but also included some Stephen Foster songs. The word "jubilee" was originally intended to set them apart from blackface minstrels, but was soon adopted in the names of several minstrel troupes.

The singers were a fundraising effort for Fisk University, a historically black university in Nashville, Tennessee, although one that was not initially approved by the university itself. The treasurer at Fisk at that time was George L. White. In an effort to raise money for the University, he gathered a nine-member chorus of students to go on tour in an attempt to earn money. On October 6, 1871, the group of students left for their U.S. tour. They began in small towns, some of which were not receptive to their performances.

Soon, the audiences they performed for began to appreciate their beautiful voices and they began to receive praise for their talents. Prior to the formation of this group, most black music was being performed by white musicians and it took a while for audiences to accept the talent of The Jubilee Singers as a group of black performers. Eventually, they were able to earn enough money to send back to Fisk University to help cover some expenses. Near the end of 1872, President Ulysses S. Grant invited them to perform at The White House.

After a tour of Europe in 1873, the group earned enough money to send back to Fisk to construct the university's first-ever permanent building. The building was named Jubilee Hall, and it is still standing today.