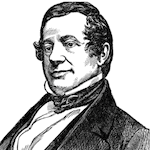 Washington Irving was an American author of the early 19th century. He is perhaps best known for his short stories, his most famous being “The Legend of Sleepy Hollow” and “Rip van Winkle” (both appearing in The Sketch Book of Geoffrey Crayon), but he was a prolific writer of essays, biographies, and other forms as well. He and James Fenimore Cooper were the first American writers to earn acclaim in Europe, and Irving is said to have mentored authors such as Nathaniel Hawthorne, Henry Wadsworth Longfellow, and Edgar Allan Poe. Irving was born in Manhattan. A lawyer, he was a member of the American diplomatic staff in Britain and in Spain. He spoke fluent Spanish, which served him well in his writings on that country, and he could read several other languages, including German and Dutch. He was a prolific essayist who wrote widely respected biographies of George Washington, Muhammad, and others, and he wrote a number of books on 15th century Spain dealing with subjects such as Columbus, the Moors, and the Alhambra. While in Europe as a young man, Irving dabbled in the theatre and even served as manager of the famed Globe for a period of time.

The Legend of Sleepy Hollow
A superstitious schoolteacher comes to a mysterious end in the isolated glen of Sleepy Hollow.
Rip Van Winkle
An idle villager experiences some strange events while taking a walk in the mountains.