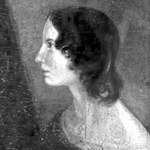 Emily Brontë was an English novelist and poet, the middle Brontë sister of the trio whose novels are classics of English literature: Emily's Wuthering Heights, Charlotte's Jane Eyre, and Anne's Agnes Grey. Emily was an avid poet, when the sisters discovered Emily's talent, the three published a joint collection of poetry in 1846. To get around the prejudice in their day against female writers, the sisters published under pseudonyms. They kept their initials the same: Charlotte became Currer Bell, Anne became Acton Bell, and Emily became Ellis Bell. In 1847, Emily published Wuthering Heights, her only novel. It first appeared as two volumes of a three volume set, the last volume being Agnes Grey by Anne. It had a unique structure that earned it mixed reviews at first, but it has since become a classic. In 1850, two years after Emily's death, Charlotte published Wuthering Heights as a novel on its own and under Emily's real name.

Poems of Emily Brontë (1846)
This collection includes poems written by Emily Brontë and originally published under the androgynous pen name Ellis Bell.
Wuthering Heights (1847)
Wuthering Heights is Emily Brontë’s only novel. The story is told in layers, a format that has earned the novel much praise despite initial mixed reviews. It is the story of Catherine and Heathcliff and how their unresolved passion eventually destroys them both.