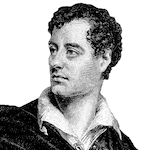 Lord George Gordon Byron was a British Romantic poet known as much for his wild ways as for his poetry. He enjoyed living extravagantly, accumulated many debts, and had many love affairs. The phrase "mad, bad, and dangerous to know" was first uttered to describe Byron. After many exploits in England, Bryon left England and took part in Italy's struggle against Austria, and then helped Greece fight the Turks, for which he is still considered a national hero in Greece. He is buried in Greece.

His literary contributions were numerous. He honed the character type that came to be known as the "Byronic hero," a figure in literature that is passionate, talented, rebellious, and ultimately tragic as his talent is laid to waste by self-destructiveness. Byron's best-known works include Don Juan, Childe Harold's Pilgrimage, Manfred, and The Giaour. He is considered one of the greatest poets of the 19th century.

Newton
A poem about Newton proving the law of gravity.