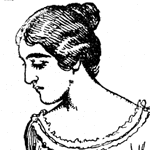 Maria Edgeworth was an English writer who, thanks to a family estate in Ireland, became intimately concerned with the country and its people. Her writing, which included commentary on Irish life and British society, was admired by her contemporaries such as Jane Austen and Sir Walter Scott.

Her father's influence, with his ideas on education to help people rise above their birth, contributed to the work she produced, including "Letters for Literary Ladies," Practical Education, and Essays on Professional Education. Her other works include Belinda, Castle Rackrent, and The Absentee. She died in 1849 in Ireland.

“The Purple Jar”
Rosamond needed new shoes, but as she window-shopped she found she desired less prudent things. She was unwise in her decisions and paid the price for it when she was unable to participate in much because she did not have the proper shoes.