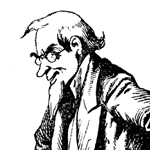 Squinty, the Comical Pig (1915)
The readers find out the origin of Squinty’s name. Squinty and his brothers and sisters grow up. Squinty wants to see the world and have some adventures, so he escapes. However, he’s caught by the dog.