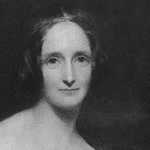 Mary Shelley  was an English novelist. She was married to the notable Romantic poet Percy Bysshe Shelley. She was born Mary Wollstonecraft Godwin in London, England, the second daughter of famed feminist, educator, and writer Mary Wollstonecraft and the equally famous philosopher, journalist, and dissenter William Godwin. Her mother died ten days after her birth and her father, left to care for Mary and her older half-sister, Fanny Imlay, quickly married again. Mary received an excellent education, rare for a woman in those days, and equally as rare she received it at home from her father. Mary eventually became a renowned novelist, best known for her seminal work Frankenstein; or, The Modern Prometheus.

Frankenstein, or the Modern Prometheus (1818)
Frankenstein; or, The Modern Prometheus was first published in London, England in 1818. It contains elements of the Gothic novel and the Romantic movement. It was also a warning against the “over-reaching” of modern man and the Industrial Revolution. The story has had an influence across literature and popular culture and spawned a complete genre of horror stories and films. It is often considered the first science fiction novel.