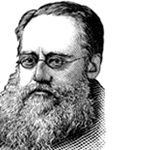 William Wilkie Collins was an English novelist, playwright, and writer of short stories. He was hugely popular in his time, and wrote 27 novels, more than 50 short stories, at least 15 plays, and over 100 pieces of non-fiction work.

His works were classified at the time as “sensation novels”, a genre seen nowadays as the precursor to detective fiction and suspense fiction. He also wrote penetratingly on the plight of women and on the social and domestic issues of his time. Like many writers of his time, he published most of his novels as serials in magazines such as Dickens’s All the Year Round, and was known as a master of the form, creating just the right degree of suspense to keep his audience reading from week to week. (Sales of All The Year Round actually increased when The Woman in White succeeded A Tale of Two Cities.)

Collins suffered from a form of arthritis known as “rheumatic gout”, and became severely addicted to the opium that he took (in the form of laudanum) to relieve the pain. As a result he experienced paranoid delusions, the most notable being his conviction that he was constantly accompanied by a doppelganger he dubbed “Ghost Wilkie”. His novel The Moonstone prominently features the effects of opium, and opium addiction. While he was writing it, Collins’ consumption of Laudanum was such that he later claimed to have no memory of writing large parts of the novel.

Collins never married, but lived, on and off from 1858, with a widow, Mrs. Caroline Graves and her daughter. He also fathered three children by another woman, Martha Rudd, whom he had met after Mrs. Graves left him in 1868. Mrs. Graves returned to Collins after two years and he continued both relationships until his death in 1889.

He is buried in Kensal Green Cemetery, West London. His grave notes him as the author of The Woman in White.

The Woman in White (1860)
The Woman in White is an epistolary novel written by Wilkie Collins in 1859, serialized in 1859-1860, and first published in book form in 1860. It is considered to be to the first mystery novel, and is widely regarded as one of the first (and finest) in the genre of “sensation novels”.