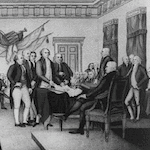 This collection includes the individuals that helped create the United States of America and some of the speeches and other documents that help us understand them. The writings of George Washington, Thomas Jefferson, Benjamin Franklin, John Adams, Patrick Henry, and Thomas Paine can be found through this collection.

Benjamin Franklin was one of the Founding Fathers of the United States. A noted polymath, Franklin was a leading author and printer, satirist, political theorist, politician, scientist, inventor, civic activist, statesman, soldier, and diplomat.

Patrick Henry was a prominent figure in the American Revolution, known and remembered primarily for his "Give me liberty or give me death" speech. Along with Samuel Adams and Thomas Paine, he was one of the most influential (and radical) advocates of the American Revolution and republicanism, especially in his denunciations of corruption in government officials and his defense of historic rights.

Thomas Jefferson was the third President of the United States (1801–1809), the principal author of the Declaration of Independence (1776), and one of the most influential Founding Fathers for his promotion of the ideals of Republicanism in the United States. Major events during his presidency include the Louisiana Purchase (1803) and the Lewis and Clark Expedition (1804–1806).

Thomas Paine (Thetford, England, 29 January 1737 - 8 June 1809, New York City, USA) was a pamphleteer, revolutionary, radical, liberal and intellectual. Born in Great Britain, he lived in America, having migrated to the American colonies just in time to take part in the American Revolution, mainly as the author of the powerful, widely read pamphlet, Common Sense (1776), advocating independence for the American Colonies from the Kingdom of Great Britain and of The American Crisis, supporting the Revolution.

George Washington (February 22, 1732 - December 14, 1799) served as the first President of the United States from 1789 to 1797 and as the commander of the Continental Army in the American Revolutionary War from 1775 to 1783. Because of his significant role in the revolution and in the formation of the United States, he is often revered by Americans as the "Father of Our Country".