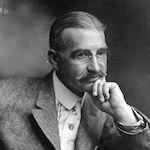 Lyman Frank Baum was an American author, actor, and independent filmmaker best known as the creator, along with illustrator W. W. Denslow, of one of the most popular books ever written in American children’s literature, The Wonderful Wizard of Oz.

Frank was born in Chittenango, New York, into a devout Methodist family of German (father’s side) and Scots-Irish (mother’s side) origin, the seventh of nine children born to Cynthia Stanton and Benjamin Ward Baum, only five of whom survived into adulthood. He was named “Lyman” after his father’s brother, but always disliked this name, and preferred to go by “Frank.” His mother, Cynthia Stanton, was a direct descendant of Thomas Stanton, one of the four Founders of what is now Stonington, Connecticut.

Baum died on May 6, 1919, aged 62, and was buried in the Forest Lawn Memorial Park Cemetery, in Glendale, California.

The Wonderful Wizard of Oz (1900)
The Wonderful Wizard of Oz is a children’s book written in 1900 by L. Frank Baum and illustrated by W.W. Denslow. It was originally published by the George M. Hill company in Chicago, and has since been reprinted countless times, sometimes under the name The Wizard of Oz. The story chronicles the adventures of a girl named Dorothy in the land of Oz. It is one of the best-known stories in American popular culture and has been widely translated. Its initial success led to Baum’s writing and having published thirteen more Oz books.
Dorothy and the Wizard in Oz (1908)
Dorothy and the Wizard in Oz is the fourth book set in the Land of Oz (though most of the action is outside of it) written by L. Frank Baum and illustrated by John R. Neill. It was published in 1908 and reunites Dorothy with the humbug Wizard from The Wonderful Wizard of Oz. This is one of only two of the original forty Oz books (with The Emerald City of Oz) to be illustrated with watercolor paintings.
The Emerald City of Oz (1910)
The Emerald City of Oz is the sixth of L. Frank Baum’s fourteen Land of Oz books. Originally published in 1910, it is the story of Dorothy and her Uncle Henry and Aunt Em coming to live in Oz permanently. While they tour through the Quadling Country, the Nome King assembles allies for an invasion of Oz. Baum had intended to cease writing Oz stories with this book, but financial pressures prompted him to write and publish The Patchwork Girl of Oz, with seven other Oz books to follow.
Tik-Tok of Oz (1914)
Tik-Tok of Oz is the eighth Land of Oz book written by L. Frank Baum. Published in 1914, the book actually has little to do with Tik-Tok and is primarily the quest of the Shaggy Man (introduced in The Road to Oz) to rescue his brother, and his resulting conflict with the Nome King.
The Tin Woodman of Oz (1918)
The Tin Woodman of Oz is the twelfth Land of Oz book written by L. Frank Baum and was originally published in 1918. The Tin Woodman is unexpectedly reunited with his Munchkin sweetheart Nimmie Amee from the days when he was flesh and blood. This was a backstory from The Wizard of Oz.