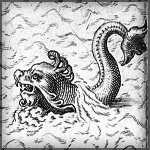 Dragons, fierce creatures of myth, fable, and legend, have been the subject of stories for thousands of years in cultures all over the world. Dragons are usually depicted as large reptiles, although descriptions range considerably. Dragons may symbolize evil, defiance, nature, power, strength, creativity, or change. Enjoy these stories of dragons and let your imagination soar!

Beowulf, the epic tale of adventure that follows Beowulf as he battles Grendel, Grendel's Mother, and later becomes king. Beowulf was originally written in Old English by an unknown Anglo-Saxon poet sometime between the 8th and 11th centuries. It is one of the most important works of Anglo-Saxon literature. This translation, by Professor Francis Gummere, was first published in 1910.

Four brothers set out into the world to earn their fortunes.

The Knights of the Fish

from The Brown Fairy Book

A fairy tale about two boys born to a man who catches a magical fish. They go their separate ways and have their separate adventures. Both end in success.

The Dragon and His Grandmother

Three soldiers desert a king’s army and end up enthralled to a dragon.

How the Dragon was Tricked

from The Pink Fairy Book

A young man is betrayed by his jealous older brother and left in the forest. He uses trickery to get out of his trouble, and still more trickery in order to make his way in life. When the king hears of his reputation he is called to the castle and given three tasks to complete.

My Lord Bag of Rice

A Japanese warrior defends the Dragon King by killing his enemy, the monster centipede. In gratitude the Dragon King gives the warrior several presents, including a bag of rice that never runs out, and he comes to be known as My Lord Bag of Rice.

Billy Beg and His Bull

from Fairy Tales and Other Traditional Stories

Billy Beg and His Bull encounter many adventures in their escape from the king’s new queen.

from The Crimson Fairy Book

Shepherd Paul was abandoned as a child and grows up to be the strongest man in the forest. He wrestles many strong men, but none can match his strength. He also fights three dragons, gains three castles, and three princess. He marries the youngest.

“The Dragon and the Prince”

A prince overcomes a dragon and rescues his brothers.