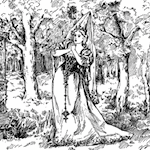 This collection includes stories of a staple of traditional tales, the princess. Regardless of your perspective – classicist, critical, post-modernist, traditionalist, deconstructionist, etc. – The Princess Collection is at your service.

A princess is cursed to have no gravity.

An enchanted maiden awaits the arrival of her suitor.

Two sisters provide assistance to a bear in distress.

from The Brown Fairy Book

A princess is captured and maimed by a giant and is rescued and made whole again by her childhood cat. When the princess marries, her cat is transformed into a beautiful princess. She had been under a spell that could only be broken by a good deed that had never been performed before.

How Blockhead-Hans won the princess over his two cleverer brothers.

A princess helps ease a cursed prince’s suffering and is finally rewarded by his curse being lifted. They live happily together thereafter.

A shallow princess is taught a lesson by a beautiful prince.

A bamboo cutter finds a small, luminescent girl, and raises her as Princess Moonlight. She refuses all suitors, befriends the Emperor, and eventually returns to her rightful home, the Moon.

The Rat King searches for the most powerful being for his daughter to marry and after he searches from the sun to the cloud to the wind, he finds the strongest being is the Grey Rat that the Princess wanted to marry.

from Fairy Tales and Other Traditional Stories

An angry fairy casts a spell on a lovely princess. The spell is made less frightening by another fairy. In spite of all efforts to avoid the spell, the princess falls prey to its power. The spell can only be broken by the kiss of a handsome prince charming.

“To Your Good Health!”

from The Crimson Fairy Book

A young shepherd refuses to abide by the laws of the kingdom when the king sneezes. The shepherd survives three perilous trials and refused three magnificent gifts for the hand of the princess in marriage, which he eventually gets out of the king’s frustration.

“Hans, Who Made the Princess Laugh”

How Hans and a special goose got the princess to laugh.