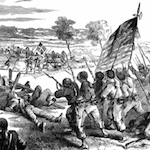 One hundred fifty years ago, the American Civil War divided families, neighbors, and states. This collection brings together fiction and non-fiction writings from the Lit2Go library that help illuminate the issues and context of the Civil War.

Behind the Scenes Or, Thirty Years a Slave and Four Years in the White House is an autobiographical narrative by Elizabeth Keckley. In it she tells the story of her life as a slave and her time as a seamstress for Mrs. Lincoln in the White House.

At the Dry Tortugas During the War is an account written by Emily Holder describing her memories of Fort Jefferson.

A Victorious Union, part of Oliver Optic's Blue and the Gray series, is an adventure story set in the time of the Civil War.

The Red Badge of Courage is an impressionistic novel by Stephen Crane about the meaning of courage, as it is narrated by Henry Fleming, a recruit in the American Civil War. It is one of the most influential American war stories ever written even though the author was born after the war and had never seen battle himself. Crane met and spoke with a number of veterans as a student and he created what is widely regarded as an unusually realistic depiction of a young man in battle.

Uncle Tom’s Cabin; or, Life Among the Lowly is an anti–slavery novel by American author Harriet Beecher Stowe. Published in 1852, the novel had a profound effect on attitudes towards slavery in the United States. The book also helped create a number of stereotypes of African-Americans. To some extent, this negative effect has overshadowed other historical impacts of the novel.

The Told to the Children Series of books were published in Great Britain in the early 1900's. The purpose of the book series was to introduce readers between the ages of 9 and 12 to the best known classic novels of the 19th Century.

from A Lincoln Anthology

Speech given by Abraham Lincoln on November 19, 1863 at the dedication of the Gettysburg National Cemetery in Gettysburg, Pennsylvania.

The Emancipation Proclamation consists of two executive orders issued by United States President Abraham Lincoln during the American Civil War. The first one, issued September 22, 1862, declared the freedom of all slaves in any state of the Confederate States of America that did not return to Union control by January 1, 1863. The second order, issued January 1, 1863, named ten specific states where it would apply. Lincoln issued the Executive Order by his authority as "Commander in Chief of the Army and Navy" under Article II, section 2 of the United States Constitution.

from Presidential Addresses and Messages

Abraham Lincoln delivered his second inaugural address on March 4, 1865, during his inauguration at the start of his second term as President of the United States.