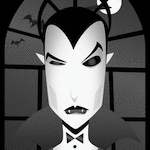 Turn down the lights, curl up by the fire, and enjoy these classic tales of frightful creatures... if you dare!

Beowulf, the epic tale of adventure that follows Beowulf as he battles Grendel, Grendel's Mother, and later becomes king. Beowulf was originally written in Old English by an unknown Anglo-Saxon poet sometime between the 8th and 11th centuries. It is one of the most important works of Anglo-Saxon literature. This translation, by Professor Francis Gummere, was first published in 1910.

Frankenstein, or the Modern Prometheus (1818)

Frankenstein; or, The Modern Prometheus was first published in London, England in 1818. It contains elements of the Gothic novel and the Romantic movement. It was also a warning against the “over-reaching” of modern man and the Industrial Revolution. The story has had an influence across literature and popular culture and spawned a complete genre of horror stories and films. It is often considered the first science fiction novel.

The Vampyre is a short novel written by John William Polidori and is a progenitor of the romantic vampire genre of fantasy fiction.

The Vampyre was first published on April 1, 1819, by Colburn in the New Monthly Magazine with the false attribution “A Tale by Lord Byron.” The name of the work’s protagonist, “Lord Ruthven”, added to this assumption, for that name was originally used in Lady Caroline Lamb’s novel Glenarvon, in which a thinly-disguised Byron figure was also named Lord Ruthven. Despite repeated denials by Byron and Polidori, the authorship often went unclarified.

The novel was an immediate popular success, partly because of the Byron attribution and partly because it exploited the gothic horror predilections of the public. Polidori transformed the vampire from a character in folklore into the form we recognize today—an aristocratic fiend who preys among high society.

The Strange Case of Dr. Jekyll and Mr. Hyde is a suspense novel by Robert Louis Stevenson, narrating the tale of Dr. Jekyll, and his menacing alter ego Mr. Hyde.

Dracula is a horror novel by Bram Stoker, narrated in first person diary entries and letters, telling the story of an encounter with Count Dracula.

The War of the Worlds, by H. G. Wells, is an early science fiction novel which describes an invasion of England by aliens from Mars. It is one of the best-known depictions of an alien invasion of Earth.