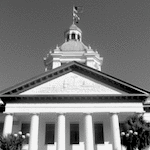 This collection brings together several books, essays, and poetry set in or inspired by the Sunshine State.

Set during the time of the Mexican War, Jack Tier is a realistic sea story.

Wakulla, A Story of Adventure in Florida (1886)

Mark and Ruth’s parents sell their plantation and move to Florida. The children have many adventures in their new home state.

When Rene De Veaux’s parents die he goes to live with his uncle, who happens to be setting out on an exploration of the new world.

At the Dry Tortugas During the War is an account written by Emily Holder describing her memories of Fort Jefferson.

Canoemates: A Story of the Florida Reef and Everglades (1892)

A Victorious Union, part of Oliver Optic's Blue and the Gray series, is an adventure story set in the time of the Civil War.

The narrator travels through Florida.

In the Wilds of Florida is a tale of an Irish schoolboy who leaves school and his struggling family in Ireland to come to America. He experiences a Florida where fighting still erupts between Cherokee and Seminole Indians, where white people are under threat of Indian attack, and the landscape is mostly swamp or plains of dense brush.

A travel guide of Florida in 1910 from Jacksonville to Key West during the months of November to April.

The Outdoor Chums on the Gulf; or, Rescuing the Lost Balloonists (1911)

The Outdoor Chums on the Gulf follows the story of Jerry, Will, Frank, and Bluff and their adventures.

The Autobiography of an Ex-Colored Man (1912)

James Weldon Johnson's The Autobiography of an Ex-Colored Man is a fictional, tragic tale about a young mulatto's coming-of-age in the early 20th century. The unnamed narrator, who has a black mother and white father, is light-skinned enough to pass for a white man but his emotional connections to his mother's heritage make him unable to fully embrace that world.

The Outdoor Girls in Florida is a story of adventure following a group of girls (Amy, Mollie, Betty, and Grace) on a journey to help their friend Will.

The Moving Picture Girls Under the Palms or Lost in the Wilds of Florida is a story of adventure following the DeVere girls on a journey through the Florida Swamps while filming a movie.

The Go Ahead Boys and the Racing Motor-Boat (1916)

The Go Ahead Boys and the Racing Motor-Boat is an adventure story about boys who enter a boat race.

Detailed descriptions of the various landmarks of St. Augustine from its founding in 1565 through 1918.

Songs of the Wind on a Southern Shore, and other Poems of Florida (1920)

Songs of the Wind on a Southern Shore, and other Poems of Florida is a collection of George E. Merrick's poetry celebrating the natural beauty of Florida.

This collection brings together several pieces from the late 1800s and early 1900s about life in Florida.